“SLAM! 🙁 8yo’s finger got into a fight with a cabinet door and lost.”
So went the caption of that photograph above when I posted it on Instagram. I took the photo after the ice packs had already reduced the pain significantly (my top, why-did-no-one-tell-me-about-this-when-I-was-a-kid tip below) because I wanted to know if my mom (dermatologist) thought I should to take my daughter to the emergency room. I wouldn’t have shared the photo except that I couldn’t believe how quickly we got the pain down and how well the wound healed in such a short amount of time. That, I thought, was worth sharing with other pain-averse parents!
Truth: “No matter how old your children are, when they hurt, you hurt.” Seeing my girl in that much pain tore. me. up. And that was just a finger! I shudder to think of the wounded predator I’d be after her first broken heart or a hard tackle on the soccer field (her father has threatened to ban me from games).
I believe part of my job as a mom is to stay calm and think rationally in such instances, which brings me to the ultimate point of this post: ouchless first aid. It is far, far easier to calmly treat a wound when your child isn’t violently suffering the treatment itself. It was my mother’s knowledge of microbes and skin and my insistence that pain be damned that led to the creation of The Big, Brave Boo-Boo Balm. My mom wanted it to be a non-allergenic (some top antibacterial ointments are allergens) but powerful antibiotic, anti-fungal, and antiviral salve for various boo-boos (from cuts and scrapes to minor burns, sores and eczematous flare-ups). I wanted it — unlike the pink or rust-colored demonic concoctions of my youth — ouchless. Taking the ouchless objective further, we put our heads together (this is a 2-generation mom tip!) and came to this awesome technique for pain-free first aid.

So many people forget the power of ice. It NUMBS PAIN. Use it freely, not just on sore joints or sports injuries! 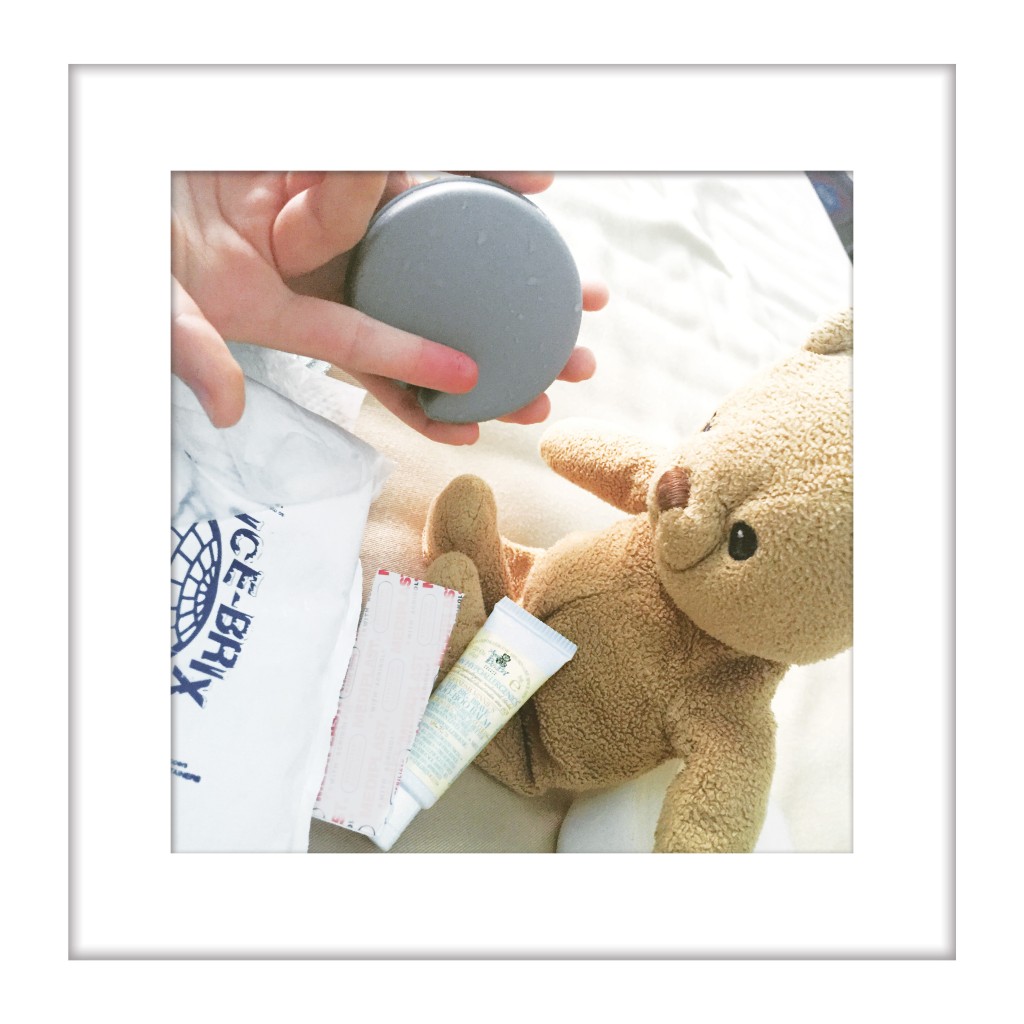 With my daughter here, the finger was so painful we did an ice compress “sandwich.” We lay her finger on its back (the unharmed part) on top of a large ice pack, and rested a small, light ice pack on top of the painful side. There was some pain for sure but it was incredible how quickly the ice brought down the inflammation and numbed the hurt.
TIP: Ice is great for mouth owies. My 5yo son was playing with some large straws and banged them straight back into the roof of his mouth. Laceration, major pain, and in an area that’s not easy to get to. We gave him a popsicle to suck on (we make ours with coconut water or coconut milk) and then had him gargle with virgin coconut oil (more on that magic later). Within a few minutes, the pain was forgotten and eating was fine with softer foods. Within a few hours, he was swallowing normal food without a care in the world. When my kids were younger, we used ice on all scrapes and cuts before any other treatment. My theory is: whenever possible, reduce the pain first. It makes kids calmer and makes further treatment faster and less awful for everybody.

Don’t think of a vigorous cleaning just yet — with virgin coconut oil‘s antimicrobial properties, you’ve bought yourself time before the dreaded washing.

Here, the pain was reduced so much that I could already drop our virgin coconut oil onto the wound within just a few minutes of icing. No rubbing, just drops of oil to cover the entire wound. We iced some more after that, and drizzled more oil after a few more minutes. Virgin coconut oil has natural antimicrobial properties and can actually be used alone to clean a wound — why it’s so helpful in mouth injuries like my son’s above, or for canker sores and sore throats. In this case, I wanted to clean the wound immediately to stop opportunistic bugs as quickly as possible…without subjecting the still-tender wound to the painful trauma of water and soap. 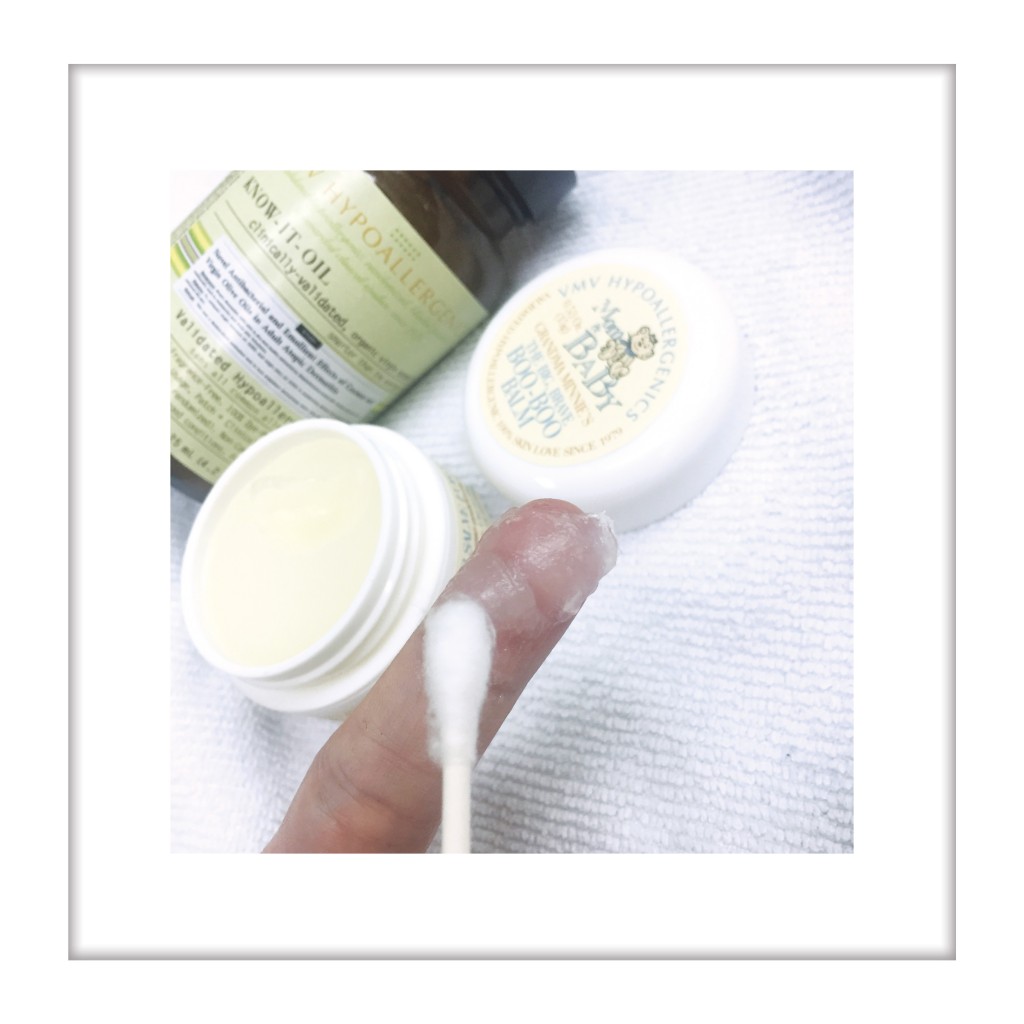 When the wound is numb enough, it’s time for moist wound healing. After applying Boo-Boo Balm, bandage the wound with a regular band-aid. For some injuries in areas of lots of movement or friction (like feet), I’ll add gauze and a non-stick tape around the hand or foot to keep the bandage on and closed for a good, long time. I love No-Hurt Wraps because they stay on well and my kids are allergic to tape adhesive.
Covering the wound (occlusion dressing) is important because it prevents the entry of air. This keeps the wound moist, allowing for the freer movement of cells and more rapid regeneration of tissue to fill up the wound (quicker healing but also much less scarring). Within a few hours (see photo below — the tissue was already regenerating to fill up the bottom of the wound) or overnight, the wound should be much less tender and healing nicely. 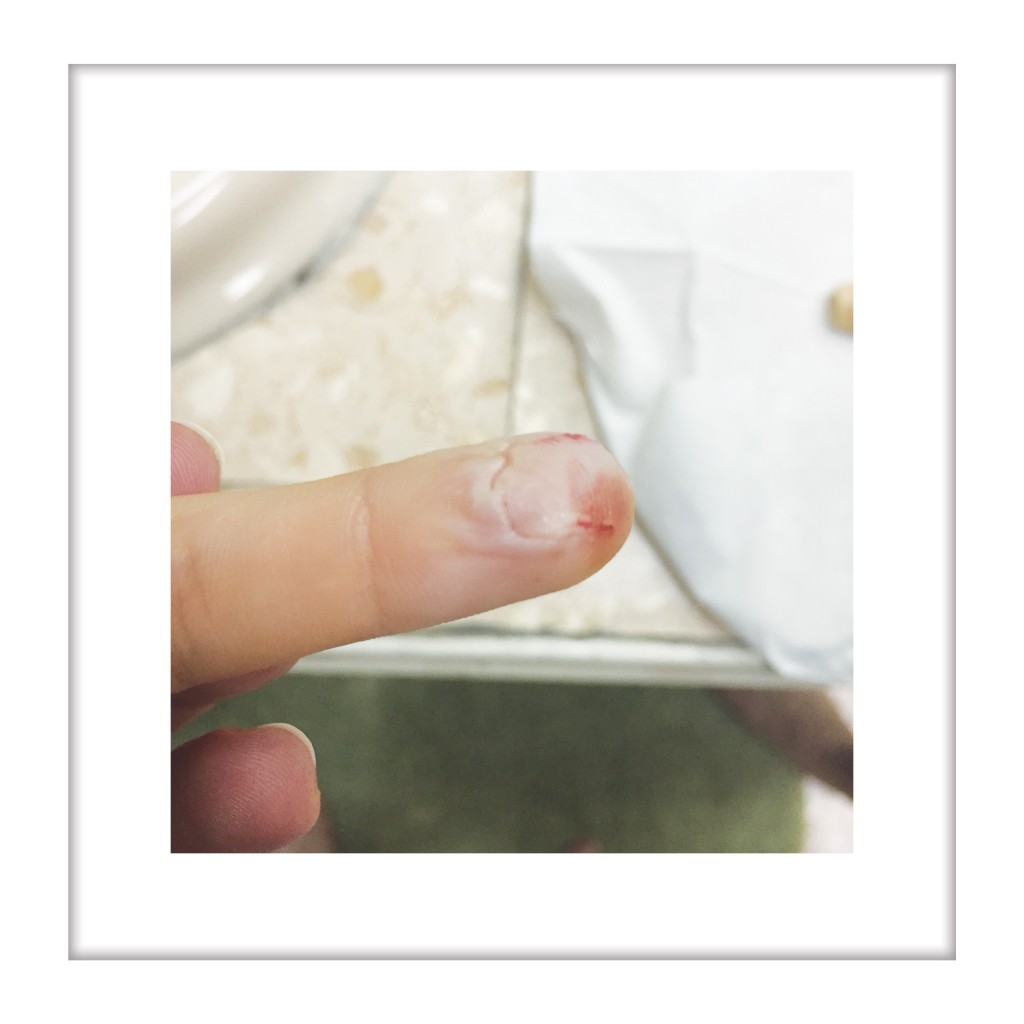 Before going to bed or early in the morning, it should be well enough to wash more thoroughly with water and a gentle cleanser. I prefer Clark Wash because it’s a light liquid, not a hard soap which can be painful to rub over the wound and is more irritating. If the wound is still too tender, clean again with just virgin coconut oil, and redress with Boo-Boo Balm and a new bandage. Wait another few hours and it should be healed enough to wash normally. Redress the wound regularly — Clark Wash and water > virgin coconut oil > Boo-Boo Balm > bandage — until healed.